HERTFORDSHIRE – BLUE COMPOSITE DOOR WITH WHITE FRAME AND SIDE WINDOWS

Blue Composite door with with Side Windows. Fitted today in Hertfordshire Blue Composite door with with Side Windows. Fitted today in Hertfordshire

Hertfordshire often abbreviated Herts) is a county in southern England. It is bordered by Bedfordshire to the north, Cambridgeshire to the north-east, Essex to the east, Buckinghamshire to the west and Greater London to the south. For government statistical purposes, it is placed in the East of England region.

In 2013, the county had a population of 1,140,700 living in an area of 634 square miles (1,640 km2). Four towns have between 50,000 and 100,000 residents: Hemel Hempstead, Stevenage, Watford and St Albans. Hertford, once the main market town for the medieval agricultural county, derives its name from a hart (stag) and a ford, used as the components of the county’s coat of arms and flag. Elevations are high for the region in the north and west. These reach over 800 feet (240 m) in the western projection around Tring which is in the Chilterns. The county’s borders are approximately the watersheds of the Colne and Lea; both flowing to the south; each accompanied by a canal. Hertfordshire’s undeveloped land is mainly agricultural and much is protected by green belt.

The county’s landmarks span many centuries, ranging from the Six Hills in the new town of Stevenage built by local inhabitants during the Roman period, to Leavesden Film Studios. The volume of intact medieval and Tudor buildings surpasses London, in places in well-preserved conservation areas, especially in St Albans which includes some remains of Verulamium, the town where in the 3rd century an early recorded British martyrdom took place. Saint Alban, a Romano-British soldier, took the place of a Christian priest and was beheaded on Holywell Hill. His martyr’s cross of a yellow saltire on a blue background is reflected in the flag and coat of arms of Hertfordshire. 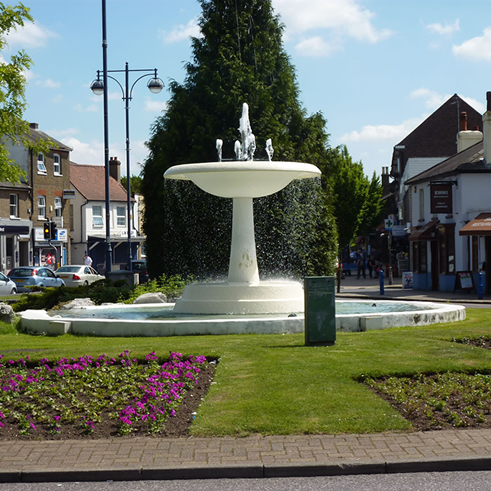